Standing on the Side of Love 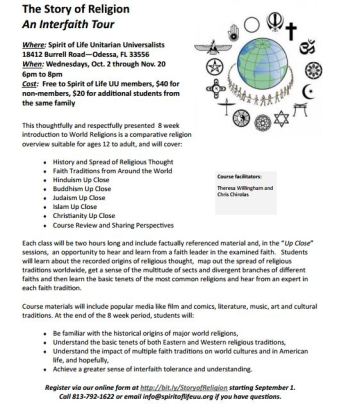 The Story of Religion – An Interfaith Tour, is an eight week introduction to World Religions  for ages 12 and up, that starts Wednesday, October 2 and runs every Wednesday evening through November 20. The course will explore:

Each class will be two hours long and include factual and referenced material and, in the “Up Close” session,  an opportunity to hear and learn from a faith leader in the examined faith.   Students will learn about the recorded origins of religious thought,  map out the spread of religious traditions worldwide, get a sense of the multitude of sects and divergent branches of different faiths and then learn the basic tenets of the most common religions and hear from an expert in each faith tradition. Course materials will include popular media like film and comics, literature, music, art and cultural traditions. At the end of the 8 week period, students will:

• Be familiar with the historical origins of major world religions
• Understand the basic tenets of both Eastern and Western religious traditions
• Understand the impact of multiple faith traditions on world cultures and in American life, and hopefully,
• Achieve a greater sense of tolerance and understanding

Course fee: Free to members of Spirit of Life UU, $40 for non-members ($20 for additional students from the same family).

Click on the flyer at left for full details and register at http://bit.ly/StoryofReligion by September 28 to participate.